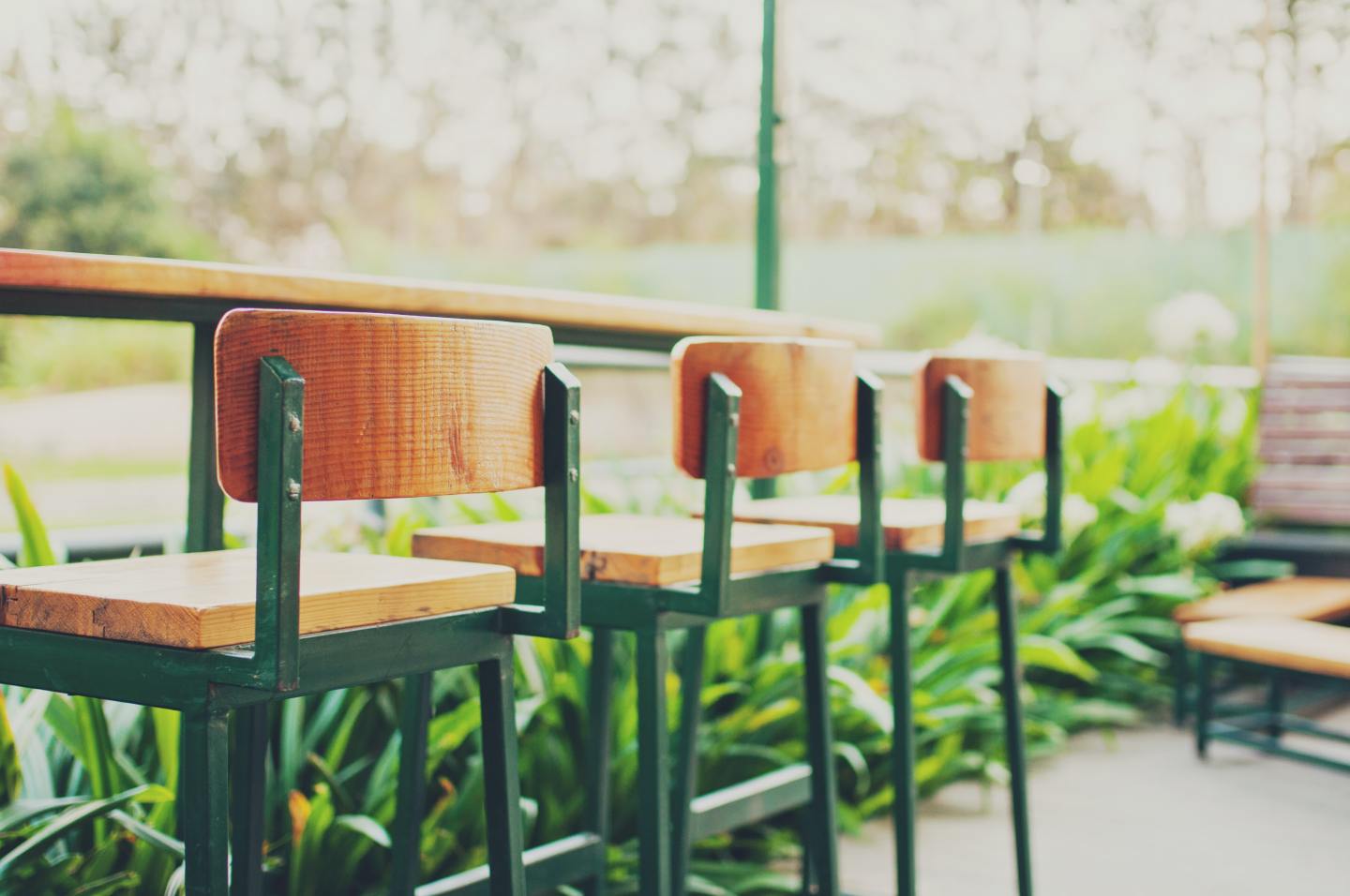 Ink stained hands. Slick hands too. Hands that had touched so many lifeless objects — lately, my felt animals, construction paper signs, and all the coffee to-go mugs at my new job — but the only one that mattered now was an autumnal snow globe. Glycerin and corn syrup and bits of snow. And red. So much red. Seeping. Slowly. Into his flannel shirt. Nothing else moved.

I threw back a third Old Fashioned, chewed on an alcohol-soaked cherry lingering at the bottom of the glass. These conversations were ink blot tests but lately they’d felt messier and messier. Like the pot of ink had fallen over onto the page and now it was just black.

Nixon was buzzed and withdrawn. Tie loosened — a successful man in a boring profession who hated that he was good at something so dull. In our corner of the bar, drunk women stumbled in and out of our circle like raw egg yolks slipping across an uneven pan — as though they were incapable of ignoring his charismatic smile. Just like I had been.

I left his side and settled onto a velvet couch. The stumbling women reminded me of my mother. When I was little, I helped her garden. We’d open the garage door, and sunlight flooded the dark corners where tools — gardening gloves, hand rake, trowel — gathered dust. Weed, dig, plant, shuffle the dirt around, pack it in tight. Water. Wipe our brows. Drink homemade iced tea. Our house was small with yellowed plastic siding but the flowers made it pretty.

It wasn’t until later in the day when wine bottles piled up at the bottom of the driveway like the lumps of weeds still sitting out on the lawn that I felt an inescapable sadness.

A short man with attractive features — prominent jawline and thick swooping hair that wasn’t held back by gel or hairspray — interrupted my woolgathering and sat next to me. The conversation was mostly a blur. Fourth Old Fashioned finished. I remembered the part about mechanical engineering.

On our way out, Nixon saw Mechanical Engineer, also outside, cigarette in hand. He marched over to him, grabbed his shirt, and shoved him backwards. Threw a punch. Had him up against the brick-walled bar in a split second. Hit him again and blood poured from Mechanical Engineer’s nose. Friends ran over. Pulled him away, down the street. Hey, Nixon. Man. Chill. It’s OK.

After that, we weren’t invited to Friday happy hour anymore.

I got a job at the corner coffee shop. The cafe sold caffeinated beverages, mugs, and knickknacks — like autumnal snow globes. I wore a denim apron with khaki straps. I liked the uniform, the people, the structure. Months without a job and I was starting to think my felt animal hobby was unhealthy. But when I saw the sign in the window — hiring — I walked right in. Now, the manager, Eddy, let me set up my menagerie in the store’s front window. Customers complimented it.

“You’re very creative,” Eddy told me. “You should make our store signs too.”

I bought a calligraphy set and sat at my kitchen table late into the night writing messages that would speak to customers: Fall into Pumpkin Spice Lattes. Half off mugs. Seasonal decor twenty percent off.

I looked up from my signage.

“That’s what they said. Guess you can come to bed then?”

I stacked my signs to finish later.

Nixon let me know the cafe left the same message the next two days in a row.

Days passed. Still hadn’t heard from Eddy about my next shift, but thought I’d check in anyway. I finished the signs and walked to the cafe. The sun on my face felt exposing but rejuvenating. When I stepped inside, I heard the familiar bell jingle and Eddy looked at me from a back table. He rushed forward, as if he’d seen a ghost.

“Home… Nixon told me you didn’t…” I stopped. Felt my gut burn as a sinking dread crept over me. Chills across my shoulders. The same burning feeling when mom took me to the grocery store too late in the day and other moms gave us looks. The same feeling when I had to cover for her — We all have colds this week. She isn’t feeling well — as I grabbed the milk and ran back to our cart.

“I’m so sorry, Eddy,” I said, thinking fast. “My husband was confused. His work called him out this week. He thought the message was for me.”

It was such a strange lie that it hung in the air like a wounded bird. Eddy, kind, friendly faced, absorbed this. Ran with it.

“Yes.” I handed him the signs.

“Thank you for these. They’re great,” he said.

I felt so bad giving Eddy a glimpse into my husband’s deceit, an aching embarrassment that had wormed its way into my soul, that I turned and picked up a snow globe. Smiled.

“I also came in because I’d like one of these for my house.”

Eddy made small talk with me as he checked me out and I felt buying the ornament — a sphere with a tiny house inside and a perfect, miniature garden — made things a little bit better. When I walked out, Eddy watched me leave.

I sat on my couch. Ink stained hands from the signs, mixed with the snow globe watery innards and — blood. Nixon had yelled when I confronted him about the lies. I held the snow globe still in its paper bag when I got home.

“The cafe never called me out. Admit it,” I said.

Nixon, like a cornered child mixed with the energy of a rapid animal, denied it. Over and over again. Over and over. He threw a wine glass and I swung the bag at his head. Smash. Shoved him like he shoved Mechanical Engineer. He fell down the stairs and stopped moving.

I took his cellphone out of his pocket. I’d forgotten what it was like to always have a cellphone. I hadn’t been able to make the payments and Nixon never offered to pay. He preferred to keep me away from a phone. Money. Friends.

The squad car lights filtered red like a sweeping searchlight into my home.

Another cop sat next to me on the couch.

I thought about the bar and Mechanical Engineer. The way Nixon made a beeline for him, afraid of something dark and ugly. I was also afraid of some untouchable emotion the moment I shoved Nixon. Some shadow that had followed me since childhood.

The cop waved his hand to cut me off.

Much later, I still worked in the coffee shop. I lived in an apartment, moved on from the past. But I owned many snow globes. Placed them around my home. They told me a story they told no one else. Small, domestic tableaus with orange and red leaves hanging from dark brown plastic bark. Fiery against stark white. A flame illuminating an abyss, slowly choking out its life, leaving a splash of vibrant color in its wake. Inside sat the perfect marriage my mother wanted, a tiny house with a garden shielded within an empty bubble. I let the story seep into my skin, deep down, deeper than the ink stains, glycerin, or blood, ever could.

Ellen Tremiti lives and works in Los Angeles, CA. She has fiction pieces published in Flash Fiction Magazine, Bewildering Stories and Gingerbread House. Her screenwriting has advanced in the Austin Film Festival teleplay competition and was selected for the Breakthrough Reading Series, a live showcase featuring female and diverse voices.

Join 537 other subscribers
My Tweets